William Worcester was a 17th-century minister in the Church of England, but his non-conformist views caused him to be ousted from his post, and he founded a family in America as a result.

William's origins are unknown, though some feel he was the son of Joseph Worcester of Rugby, England. He was born in about 1601, and he attended St. John's College at Cambridge in 1620. William was ordained as a deacon at Peterborough Cathedral on December 21, 1622, and during the summer of 1624, he was made vicar of Olney (in Buckinghamshire). He got married in Olney to a woman named Sarah on February 11, 1627. They eventually had 13 children, of which 8 died young. 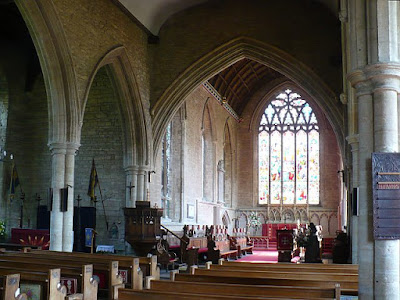 Interior of church in Olney where William served as vicar. (Source: Robin Drayton)

In telling the story of William’s work as a minister, it’s helps to understand the times in which he lived. Puritans were extremists in England who developed their views after the break with the Catholic Church in the 16th century. Certain people felt the Church of England kept too many traditions of Catholicism, and wanted to practice their religion more like the Calvinist sects which were in other parts of Europe. Some tried to stay within the official church by advocating to reform it, and William was an example of this. But after Charles I became king in 1625, authorities sought to crack down on such dissenters, and it became much harder for him to preach to his congregation.

Those working for Charles I passed new rules to keep non-conformists in line. One Sunday in 1636, all ministers in the Church were ordered to read from "the King's book," telling their congregations that they were allowed to participate in sports and recreation after church service was over. This was something William believed was wrong, and for refusing to read the passage, he was reprimanded and stripped of his office as vicar.

Within two years, William migrated to America with his family and he was welcomed as a minister in the Massachusetts Bay colony. Sometime between 1638 and 1639, he became pastor of the church in Salisbury, where he was now able to preach according to his beliefs. His status as minister made him one of Salisbury's early prominent men. As a member of the community, William received land when a new tract was acquired by the town in 1640, and also in 1654.

William's wife Sarah passed away on April 23, 1650, and on July 22 of that year, he married Rebecca Hall, a widow whose maiden name was Swayne. He continued as Salisbury's minister until he died on August 28, 1662.

William left a large number of descendants, and among them was Bette Davis.